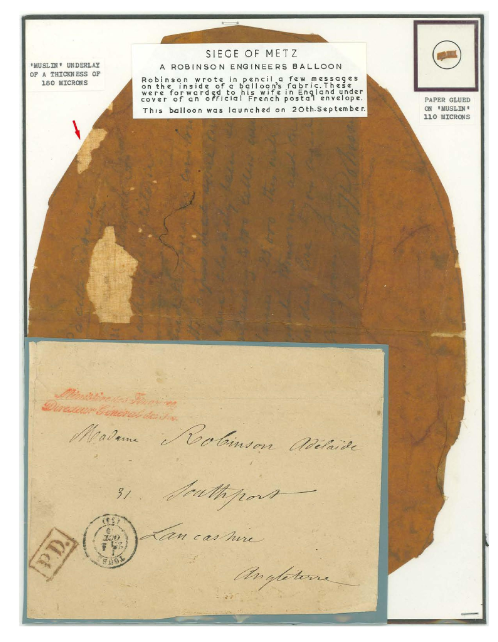 One of the ingenious means of communication used by the French during the Siege of Paris, between September 1870 and January 1871, was Ballon Monte, which is mail that was taken out of the city by manned hot-air balloons. All the commentaries on this fascinating subject tell you the origins of this innovative form of early airmail is thanks to Gaspard-Félix Tournachon (known as Nadar) or Eugène Godard, or both. But strictly speaking it’s the Montgolfier brothers, also French, who invented hot-air balloon aviation in 1783 and should be congratulated. Or if we are being pannickaty then really we should be patting the British Armed Forces on the back for the sterling job they did when under a siege, funnily enough, by the French and Spanish armies, for 3 years, seven months and 3 days, which you’ll note is a darnsight longer than the French held-out as a result of their skirmish with the Germans during the Franco-Prussian war. The Brits were hauled-up inside the Gibraltar fortress during the legendary Siege of Gibraltar, and it is this that we can trace back as the inspiration for hot-air ballooning.

You see, the tale of Ballon Monte really started in the backend of 1782 when the French and Spanish armed forces, and it has to be said both their nations as well, were all getting a bit weary and fed-up because they couldn’t find a way through the impenetrable British defences, and it was this that caused Joseph-Michel Montgolfier to ponder one of the great military issues of the day, and come-up with a way to attack the fortress of Gibraltar, which for over three years had withstood attacks from both sea and land. Apparently Joseph was watching a fire one night, thinking how an air assault with troops could be affected upon the British in Gibraltar when he noticed the embers from his fire rising up into the air. This caused him to think that there was a gas being produced from the fire and this could maybe enable flight. Anyway, the rest is history because by the following November of 1783 the Montgolfier brothers had perfected their design of a balloon powered by hot-air, and conducted trials with animals on board and then performed what was the first piloted flight of a hot-air balloon – voilà!  So if the British hadn’t held out as long as they had, say they broke down in the first four months under the grip of the French-Spanish blockade and assaults, then Joseph Montgolfier would never have had such a conundrum to place his intellectual prowess. Afterall, he had other inventions on the go, such as the hydraulic ram and transparent paper manufacturing.

Of course, the truth is that the British had nothing to do with the Paris Ballon Monte in reality, the association inflated somewhat to illustrate the history behind balloons and lead us to reflect on what amounted to 66 manned Paris Siege flights taking a staggering 3 million items of mail, helping 160 people to escape, and carried more than twice that number of carrier pigeons, that were trained to return with messages, and incredibly around 60 of these feathered balloon passengers actually did return under their own wings, with plans and microfilm. It’s a wonderful story. But there is a less glamorous siege, or certainly one that doesn’t get as much attention as Paris, despite it occurring during this French-German scrape in 1870-1871, and it is one where we can give credit to a British war correspondent, George Robinson, who sent (October 1870) some innovative unmanned balloons crowded with messages when he was caught-up in the siege of Metz. 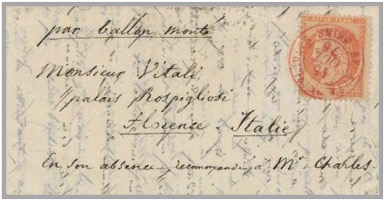 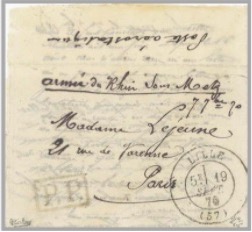 These were smaller structures made from paper with the edges pasted together and vanished with oil. Each balloon carried hundreds of tiny letters which were bundled together and wrapped up with a message for anyone who discovered it offering a 100 Francs reward to take it to the nearest post-office. And some actually got through. These gas-filled postal mini airships are known as the ‘Engineers Balloons’ being sent in collaboration with French Army Engineers.

The featured example, whilst not the most attractive looking piece of postal blimp, is a very rare survivor accompanied with an official French postal envelope for its onward journey to Robinson’s wife in Lancashire. Robinson wrote messages on the lining of the balloon in pencil. Whilst he also sent messages back to his newspaper as well, there is no record that any of these got through at the time. And like our tale above, in reality we can’t give full credit to the British, even though Robinson is said to have pioneered the use of balloons during the siege in Metz, because a month before (5th September 1870) Frenchman Dr Papillon was one of the first people to set up a balloon post during the siege.

Whoever is really the inspiration for this French siege busting airmail, it does seems an odd coincidence that the genius for the vehicle used to float up into the air, over the enemy lines, stems from the same nation’s wish to attack an enemy, from the air, who they had under siege, and which was also a campaign they finished on the losing side. The moral here is perhaps that balloons are just bags inflated with hot-air and do little to improve your chances of winning in a siege situation. But they’re not bad at getting mail delivered.