The year 1933 was a turbulent one around the world. There was an economical crisis worldwide and what is known as the great depression which affected most countries on the planet. Unemployment was at an all time high and in Germany, which was particularly affected, Adolf Hilter was appointed the Chancellor and promptly banned all other political parties, turning Germany into a One Party State, and we all know how that played out. On a more positive note in the same year the rather aptly named Wiley Post became the first pilot to fly solo around the world, and coincidentally the Italian Air Cruise took off and connected Italy with the Netherlands, Iceland, Canada, the United States and Newfoundland, and also Great Britain and Ireland, Portugal and France. This is all expertly illustrated in the Luca Restaino exhibit, ITALY: 1933 La Crociera Di Balbo Del. This three time Large Gold medal winning collection provides an historic insight into this specialised area of collecting, putting on display rare stamps, tied to airmail covers, including registered use, posted to unusual destinations and cancelled by rare cachets and postmarks. And what is surprising is some of the locations the flights and mail passed through or received a dispatch or arrival mark – such as; Begasi, Reykjavik, Shediac, Tripoli, Shoal Harbour, Ponta Delgada, and amazingly Vatican City. But one of the more extraordinary examples, and indeed now very rare, is the 1933 set of stamps issued in Italy to commemorate a special transatlantic flight led by General Italo Bilbao who commanded an ariel armada of 24 flying boats that went from Rome to Chicago. The Italian postal authorities created two three-part airmail stamps, which are scarce mint or used. Several examples of these are illustrated in the exhibit, including unused and on covers, all rare, and the most notable is an envelope, which is the only known cover with two Se-tenant postage stamps with the “I-Bian” and “I-Balb” overprints, and one of the seven known Airmail covers from the return flight. Another rarity is a envelope, again sent in 1933, which is the only known cover with Vatican postage carried on-board the Balbo flying boats sent to Shediac. It also bears the autograph of Lt. Col. Ugo Longo, commander of the “I-Long” aircraft. It also has another rather special feature in that it has three expert certificates spanning 50 years in philately. The first one issued in 1966by the legendary Italian expert Giulio Bolaffi, then in 1982 another eminent Italian philatelist Emilio Diena put his seal of approval on the envelope, and then more recently in 2016, Dr Giorigio Colla, issued the third certificate in what is a divine trinity of expert opinion accompanying this special cover, and available to view on the Museum, adding an additional layer of historical interest to what is already a captivating topic.

And there is also a Newfoundlands envelope which was transported on board an aircraft from the Balbo Cruise, on the America to Europe return flight and bears the associated cachet and arrival postmark at Lido di Roma and crucially is the first Airmail Flight to England via Italy. Incidentally, it also has an Emilio Diena expert certificate (1989), again loaded on the website for your information.  Undoubtedly, General Italo Bilbao encountered some turbulence during his escapades in 1933, but the flying boats united, rather than isolated, a number of nations and continents on both sides of the Atlantic, and his armada of 24 planes might not get the plaudits aviator Wiley Post receives for his around the world feat, you can certainly argue the Italians were wily in getting post delivered to some far flung places around the world. Today, ironically, it’s the philatelist who needs to be a tad wily to obtain post from the 1933 Italian Air Cruise Mail. 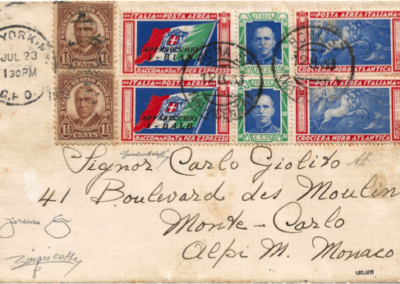 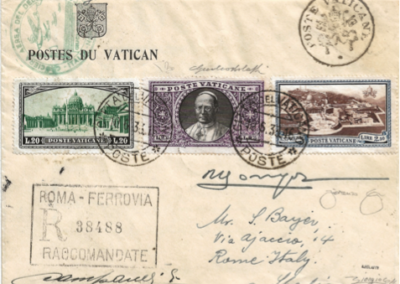 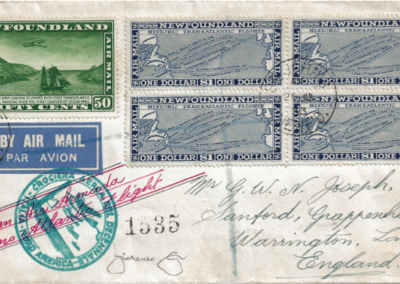