The Happy in a Sad Story 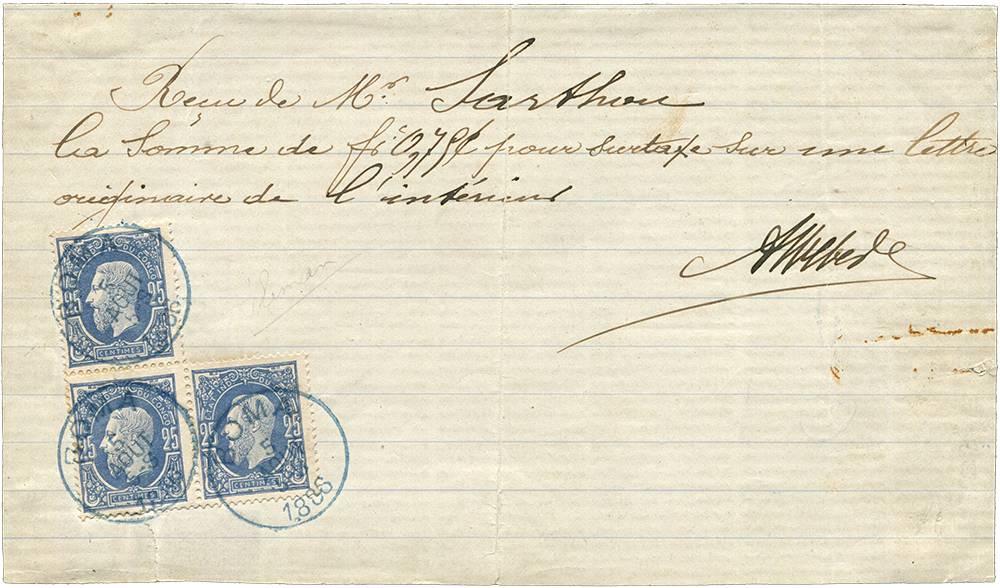 It’s a sad story if you start digging around the history of the Congo Free State (1885 to 1908) and there aren’t many, if any, happy stories to lift the gloom of atrocities perpetrated in the colony under the personal rule of King Leopold II. It’s easy to forget that two sets of stamps were created for use in this Central African country which was supposed to be an humanitarian and philanthropic project. The reality was far more inhumane and really the state was set up for profit.

The first stamps issued in 1886 have the profile of King Leopold II but were replaced in 1887 with those with his portrait. The former seemingly has the Monarch with grey facial hair, the latter with a distinctive black beard. Now, notwithstanding that from a philatelic and postal history perspective there are many intriguing items, both unused and used to collect from this independent state, and as you might expect some scarce and extraordinarily rare material to decorate a specialist exhibit or collection. One good news story which does come out of this period, is related to a unique item in the collection BELGIUM CONGO: Stamps issued between 1886 to 1887, assembled by Patrick Maselis (RDP, FRPSL).

The item in question is an 1886 receipt for an unpaid letter that arrived in Boma, Congo. The charge for collection was 75c, made up of three of the first issue 1886 Leopold II 25c blue stamps. It’s the only known example of this type. That’s not the happy news story though, despite it being philatelically pleasing. The nice bit is this cover was once in the collection of top Belgium Congo collector and expert Raymond Keach (1912 to 2001), who in 1951, with another legendary Belgium collector, Doris Green (1904–1999), formed the Belgian Congo Study Circle. Keach was a Fellow of the Royal Philatelic Society London, and served on their expert committee for stamps of the Belgium Congo. He formed an outstanding collection of this topic, but in the 1990s two of his albums, containing the featured cover and many incredible items were stolen. It was a travesty, but sadly years went by and no news of the albums was forthcoming and there was no progress in discovering who took the collection. However, five years later, two British men walked into an auction house in Brussels and presented these two albums for sale. Fortunately, one of the people working at the auctioneers was a Belgium Congo aficionado, who immediately recognised the surcharged receipt and upon further review began to realise that the two albums must be the ones missing and belonging to Raymond Keach. In a clever move the two auctioneers attending that day managed to get the albums on consignment for inclusion in their next auction. Once the two British men had left the premises the auctioneer telephoned Raymon Keach to inform him that he’d recognised the collection, and that it was now in safe hands. They then reported the matter to the Belgian police, who contacted Scotland Yard. A few days later two British detectives from London arrived with photos of various possible suspects, to which the auctioneers were able to identify the men that had attended the shop offering the collection for sale.

Now whilst we have no idea what happened with the investigation into the two handling the stolen goods who arrived in Belgium to sell the stolen collection, they never returned to the auctioneers for their lots. However, what we do know is that once the Court of Justice in Brussels had followed the legal process and ascertain ownership, about 6 months after the albums had mysteriously arrived on the desk of the auction house, Raymond Keach was reunited with his stolen Congo collection.

It’s a happy ending to a rotten incident. You could say it’s a happy story, in the sad history of the Congo Free State.

BELGIUM: Congo 1886 Leopold II issues. Surcharged receipt applied to a letter weighing between 31 and 45 grams originating in the interior (Haut-Congo) and reached Boma unpaid. The agent pursuant to article 6 of the Regulations established a receipt for the sum of 75c, equivalent to the postage for a triple port and affixes three 25c blue stamps and cancelled by the stamp BOMA cds dated August 5th 1886.