It might surprise a few people to learn that in December 2020 Thailand became the world’s number one ranked country for fixed broadband internet speeds*, beating 175 other countries to the top spot, with an average download speed of 308.35 megabits per second**. For the less technical among us, that’s superfast and given the global problems we’ve all been grappling with over the last year or so, which has undoubtedly increased reliance upon Internet based technologies, we can all be a tad envious of Thailand. To illustrate how far ahead of their European and American counterparts Thailand has risen, the leading European country was Switzerland who came in an impressive 5th, with speeds of 188.88 mbps, and then France a very respectable 8th with 178.87 mbps, and heading up the Americas was the USA who weighed in at 10th with 173.67 mbps.

We shouldn’t be surprised at Thailand’s ability to outclass the rest of the world, because as well as being known as one of the friendliest and most beautiful places to visit, their rice has frequently been declared the world’s best, they are one of the world’s largest exporters of rubber and their royal family is judged to be the world’s richest. And it might also surprise a few to learn that Thailand boasts one of the great philatelists of the 21st century, in Dr Prakob Chirakiti, who has won a combination of Cintinetal and World-class winning four FIAP and four FIP Grand Prix awards for his study on Siam. Having said ‘boast’, the reality is, you will struggle to find a Thai national boasting about their broadband speeds, rubber, or rice, let alone Dr Chirakiti, the latter who signed the Roll of Distinguished Philatelists in 2019, and is a Fellow of The Royal Philatelic Society London. The truth is, Thai people are notoriously humble, and the fact that much of Dr Chirakiti’s achievements are not widely known says more about the humble philatelist than how quickly information is downloaded around the world.

However, top-level international philately does inform us who has risen to the very top and Dr Chirakiti, who is a specialist in the philately of Thailand assembled an exhibit titled, “Siam: The Early Years” which in 1996, at Beijing, won the Federation of Inter-Asian Philately’s (FIAP) International Grand Prix. Then in 2003, in his home city of Bangkok, he was awarded the Fédération Internationale de Philatélie (FIP) Grand Prix National which led him the following year to achieve the FIAP Grand Prix d’Honneur in Hong Kong. This collection, along with another study developed by Dr Chirakiti called, “Siam Classic: The First Issue“, are presented upon the Museum of Philately, and this second exhibit on Siam is also highly decorated, winning two Grand Prix International awards – the FIAP in China 2003, and the FIP in St Petersburg in 2007 – and it has also been awarded the Grand Prix d’Honneur in 2014 at the FIP Exhibition in Seoul. And, Dr Chirakiti has put his award winning capabilities to use in serving the international philatelic community, being an accredited FIAP and FIP judge and secretary of the Grand Prix Club, as well as being elected as the president of the Federation of Inter-Asian Philately executive committee in 2017. It’s an impressive set of philatelic credentials, which is reflected in Dr Chirakiti’s broader life, with two Master’s Degrees and a PhD in Industrial Engineering, and a man who has held senior positions within the Government of Thailand, including a Member of Parliament, Vice Minister attached to the office of the Prime Minister, and Deputy Governor of Bangkok.

So, whilst you can read more about Dr Chirakiti and his exhibits on Siam on the Museum of Philately, it shouldn’t surprise anyone that you won’t enjoy these world-class collections on an Internet connection anywhere near as top-ranked as the country in which they tell the philatelic story. Unless you’re in Thailand, and then you’ll be acknowledging these mega facts with some pride – humbly of course. 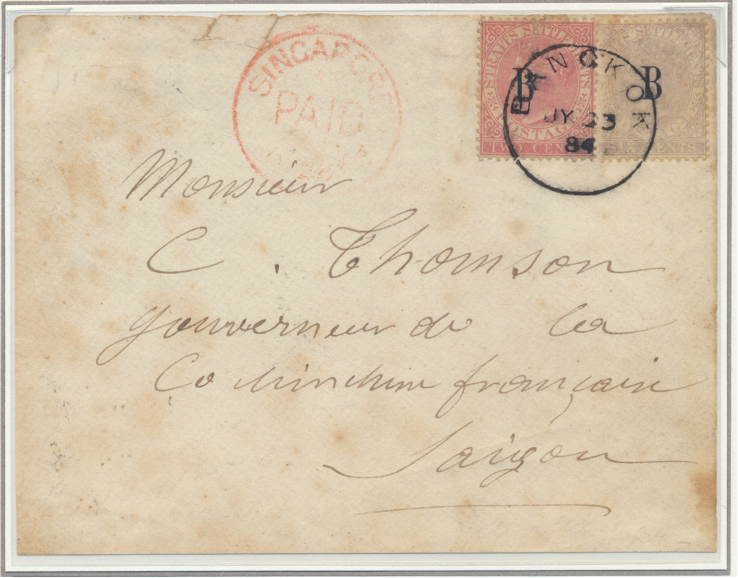 A cover from Dr Chirakiti’s exhibit: ‘THAILAND: Siam Classic: The First Issue’ and 1884 Straits Settlement ‘B’ Overprint example which is the only Known Cover to Saigon