The Synergy of France and Greece

There are moments in time when two things combine resulting in an outcome that is far greater than the sum of their separate effects. Otherwise known as synergy, and this is artfully demonstrated in philatelic history by the 1861 Greece first issue ‘Large Hermes Head’ stamps. These ironic adhesives were prepared and printed by the French Chief Engraver at the Paris Mint, Albert Désiré Barre (1818 to 1878), for the Greek authorities. This collaboration provided us with seven denominations (1, 2, 5, 10, 20, 40 and 80 lepta) depicting the profile of the Greek messenger god Hermes (Mercury) in a frame which closely resembles the ones used for stamps of France. Indeed it is easy at a quick glance to think that these Greek stamps are French, albeit the French feature the goddess Ceres, and as we all know these too are legendary stamps and like the aforementioned Hermes heads they are widely collected and studied by philatelists the world over.

And that quite conveniently leads us to another occurrence of two factors combining to bring about a result which far outweighs the individual parts, and which pertains almost precisely with the circumstances already highlighted and that is a French Philatelist living in the Paris area, who decided to devote their energies and focus upon the 1861 Greece Large Hermes Head issues, because his mother was a Greek national and he was living in Paris. It’s a synergy which has resulted in Louis Fanchini (1956), who is a Fellow of the Royal Philatelic Society London (RPSL), and member of the Académie de Philatélie, to win five Gold and five Large Gold medals amongst other things, for his exhibits on the fabrication and postal use of these Greece Large Hermes Heads, printed poetically as we well know in Paris, France.

Three of Louis Fanchini’s exhibits on this topic are now available on the Museum of Philately and illustrate the depth and breadth, and importantly the effect of over 20 years of detailed study. Mind you it did not take Fanchini as long as that to receive recognition for the collection because in 2013, in Athens he was awarded 94 pts and the Grand Prix Large Gold in Greece. Since then he has won similar at London in 2014 and 2015, Vincennes 2014 and New York 2016, as well as again winning in Athens in 2015.  And more recently his exhibit GREECE: Fabrication & Postal Usage of the Large Hermes Head of Greece 1861-1901, has picked up Large Vermeille, at Epernay, France in 2018, Gold, at Montpelier, France in 2019 and an International (95pts) Large Gold at Athens in 2021.

And as alluded to earlier, it is not only winning medals for his exhibits because Fanchini has contributed many articles and research papers for both Greek and French philatelic literature, as well as participating in numerous conferences for international philatelic clubs in this area of study. As a result in 2016, he was awarded the medal from the Hellenic :Philotelic Society (HPS/EFE) of Athens for his “Significant promotion and spread of the Greek stamp – Outstanding awards with Greek exhibits in world and international exhibitions and Authorship of studies”.

As you might expect whilst his collection are Greek in their focus it does have synergy with the French material is has its origins, and one unique item is the Paris “Cérès 1858” Plate Proof typographic plate produced with the ‘direct striking in the coining press’ method developed in 1858/1859 showing in the marginal of the block of six the ’10’ value in blue on reverse and is the only known piece with the imprint of the Paris printer Ernest Meyer.  This is complimented by a 1861 Large Hermes Head 80 Lepta, block of eight Imprimatur marginal sheet, which also has the printer inscription for Ernest Meyer as well, and is the largest known block. It is a moment in time that collector and his collections demonstrate that synergy between France and Greece in philately is far greater than the sum of their separate effects. 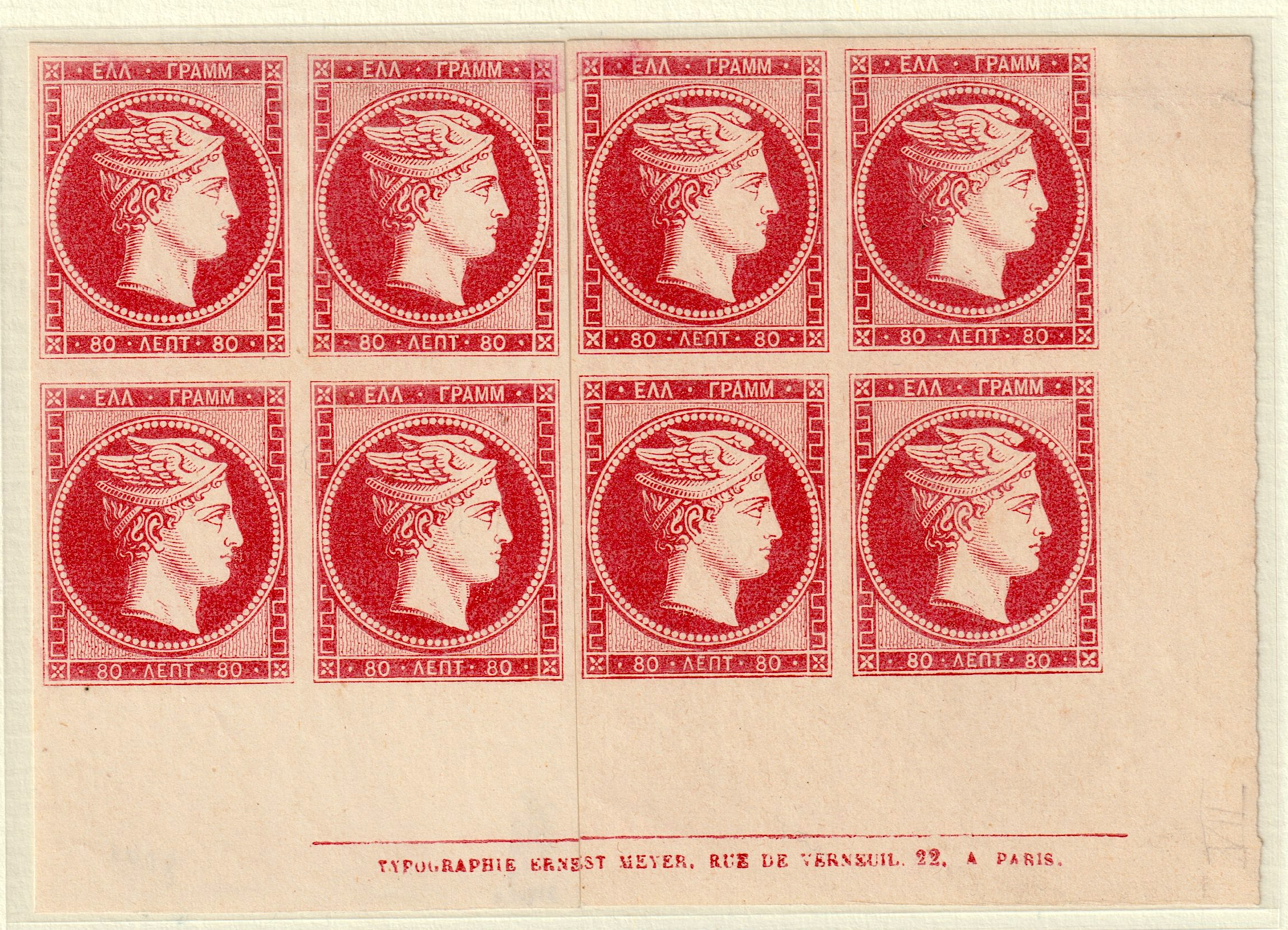 The three collections can be viewed by clicking on the links below:-