“The Great Encounter of the Solferinos” – NOTOS 2021

The NOTOS European Philatelic Exhibition is going ahead, 19th to 23rd November 2021, in Athens, Greece, and one of the events they are putting on is a rather exciting exhibit titled; “The Great Encounter of the Solferinos”, which is bringing together eleven of the thirteen recorded copies of this coveted stamp which are being put on show by six exhibitors. One of them will be our very own Marcus Orsi from the Musuem of Philately, who will be taking the only known cover, by kind permission of the current owner, to display at the five day event. To celebrate the 150th anniversary of this iconic Greek stamp, we take a closer look at this fascinating and revered postal adhesive. Marcus will be presenting at the show on Sunday 21st November from 16.00 -18.00. More information can be found here. 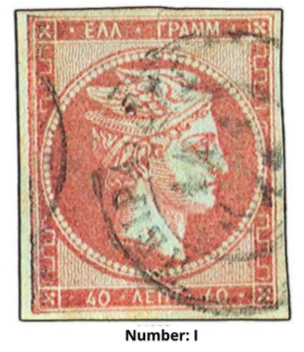 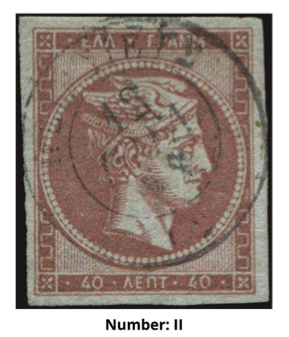 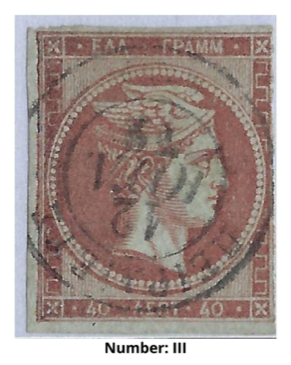 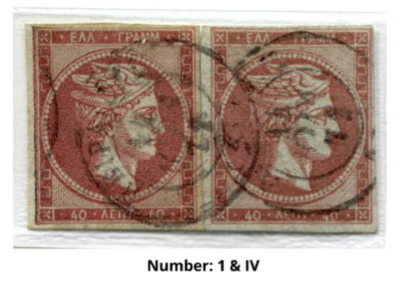 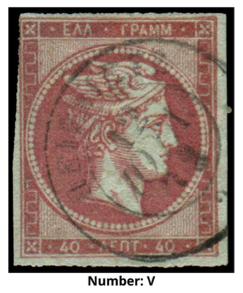 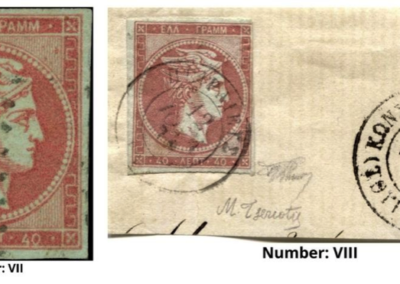 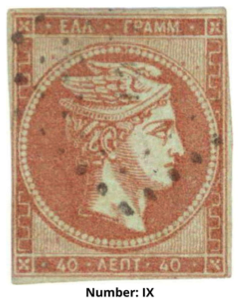 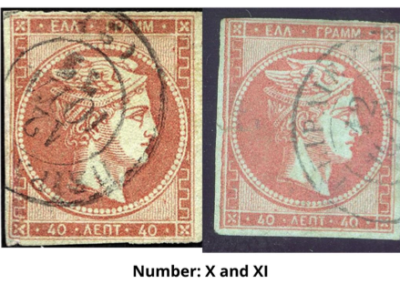 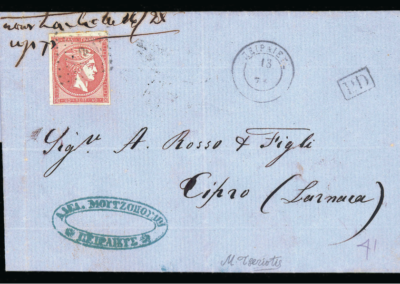 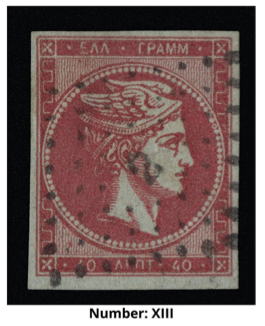 The Greek 1871 40 lepta lilac-rose colour variety, which is printed in the shade of the control figures used on the reverse of the stamp, are one of the most famous and ellusive of Greek stamps, and a recognised world rarity, with thirteen copies recorded. The stamp should have been printed in a rose-bistre or yellow-bistre shade, and takes the name “Solferino” because when first identified it reminded the discoverer of the colour of the blood stained clothes of the soldiers from the battle of Solferino in 1859, which was fought between the Franco-Sardinian troops and the Austrian army, in Solferino, Italy, and nothing to do with Greece.

It is thought that just one sheet of the famous Solferinos was printed with all copies cancelled with either the “2” of Piraeus or the corresponding cds, with a narrow date range confined to the 12th to the 14th July 1871. All of the thirteen survivors are used; one on cover, one on a piece; two of the total formerly an adjoined pair, at some point were separated, but in 2018 were reunited and now sit side by side in the same collection again, the rest singles.  Here is a breakdown of each example:-

Number III has three margins, the east side cut into. It was known to have been in the collection of the famous Greek philatelist A. Argyropoulos, as well as C. Binos. It was purchased in the 1980’s by Argyll Atkins and was apparently sold in 1983 to G. Zachariades, a well known Greek Collector who held Numbers I, VII, VIII and XII. It was sold in 1992 for £44’000, to S. Andreadis. It is believed that this stamp is from position 131 on the sheet of stamps.

Number IV, which is featured here to the right of Number I, having been reunited, and has two strikes of the “Piraeus 14 Jul 71” with close to good margins and interestingly has the initials “PLP” which is ‘Pemberton’ an early expert on this issue. It was held in the collections of N. Alfieris, Herman Nagele (1954). In 1955 it received a Royal Philatelic Society expert certificate; it was sold in 1962 (Robson Lowe Nagele collection lot 78) for £500. It was then sold in 1987 during the Christie’s sale of the collector, G. Kotsis. It was acquired by A. Kadinopoulos in 1995 – Karamitsos auction, Athens, sale 56, lot 100 and sold for Drs 22’360’000.  It is stamp position 92.

Number V again has the trademark cancel “Piraeus 12 Jul 71” with large margin but cut into top left. It was once in the collection of Herbert Bloch and was certified in 1988 by Peter Holcombe, and was a Private Treaty offering in that year: George Alevizos, Santa Monica. Not much is known about the owner between this date and the current time. It is being exhibited at the NOTOS 2021 in November under the guise of an anonymous exhibitor, “The Great Encounter of the Solferinos”.  It is plate position 140.

Number VI is used with the “2” diamond of dots postmark, has a scissor cut in the margin at the lower left which doesn’t affect the borderline of the stamp and with a tear at left. It is also signed by Pemberton “PLP” on the back. It was sold during the T. Verschoyle auction sales in 1986 held by Christie’s and sold for CHF 67’500 (lot 1277) and purchased by Constantin Mattheos and exhibited by him during Anphilex, New York in 1996. Not much is known about its whereabouts since then.

Number VII is also used with the “2” diamond of dots postmark and has a small tear at the left, with good margins. It was known to have been acquired by HG Jones, before being purchased by Ron Lee. It was certified by Diena, and then M. Tseriotis in 1985. It was sold in that year at a David Feldman auction for CHF 172’500 (lot 10164) and went into the collection of the Greek philatelist G. Zachariades.

Number VIII is the only known example tied to a piece by the “Piraeus 12 Jul 71” cds and with a ‘Constantinople’ circular dated to the right of the fragment alongside. It has been in the collections of; C. Zinopoulos, HG Jones, Ron Lee (Maximus) and G. Zachariades, who purchased it at a David Feldman auction in 1984 for CHF 230’000. It is signed by the experts, Diena and M. Tseriotis. It is from the plate position 27, and is being exhibited at NOTOS 2021in November by Exhibitor; Stavros Andreadis.

Number IX is a used example with a faint number “2” diamond of dots and has two margins, touched in places and has a crease at the upper left. It has been in the collections of, J Janky, Nikolas Wasdekis and Emmanuel J Mavrides, who purchased it in 1987 for CHF 57’500. Peter Holcombe certified it in 1986.

Number X is used with the “Piraeus 12 JUl 71” cds and has good margins (although in Williams he indicates it has a cut into margin left but no illustration of this stamp). It was known to have been in the collection of Judd, and received a BPA certificate before being acquired by Peter Holcombe who sold it in 1969 to G. Trefonas, who sold it to Nikolas Wasdekis. It received a BPA certificate again in 1974 and was purchased by Emannuel J Mavrides in 1985. It was sold later to an unknown collector. It is from position 136 on the plate.

Number XI is cancelled by the “Piraeus 12 Jul 71” cds and sold in 1956 at the HCV Adams sales, selling for £63. It appeared again in 1960 selling at a Stanley Gibbons auction for £100. It was apparently acquired by a Chilean collector. Then interestingly in the 1980’s it was acquired by a stamp dealer in Geneva with a small collection of stamps, but was not identified as a Solferino. It was later sent to Orestis Vlastos who correctly identified it. It is known to have been in the collection of M. Konialides. It is from position 31 on the sheet.

Number XII is the only known Solferino on cover and is known as “The Solferino Cover’ and famously sold in a David Feldman auction in 2002 for CHF 645’250. It was in the collection G. Zachariades. The stamp is from position 21 on the sheet. The cover is certified by M. Tseriotis in pencil to the front. The stamp is tied by the “2” diamond of dots and there is a cds from “Piraeus” which is dated 13 Jul 71 and the cover is sent to Larnaca, Cyprus.

Number XIII is used with a “2” diamond of dots postmark, has a slight thin and crease but large margins and a rich colour. It was purchased by H Sassenhausen from a London dealer in the 1960s. It was certified in 1979 by Georg Buhler, although thought that it wasn’t correctly identified. It then was certified as a Solferino in 1990 by M. Tseriotisand sold in 1990 at a David Feldman auction for CHF 80’500 and acquired by Emmanuel J Mavrides. It is from plate position 77, and is being exhibited at NOTOS 2021 Athens by an anonymous collector.

Interestingly the history of these stamps informs us that it is still possible to discover an example of this stamp, whether a previously unknown example or perhaps an incorrectly identified copy, although it has been several decades since such an incident has occurred. But even so, lookout for this distinctive blood shade on a 40 lepta. If in doubt, it will match the ‘40’ control colour on the back of the stamp. Happy hunting!

For more information on this issue visit the Museum of Philately website.

Note: The numbering system used for this census is the references given by Williams in the Encyclopaedia of Rare and Famous Stamps, published by David Feldman SA.