The Sweet and Bitter of the £5 Orange

In Britain around the year 1876, a £5 Orange stamp was equivalent to about £1000 in today’s money. It makes you think what on earth could anyone send that would cost that amount of cash? But that’s not the half of it, because one of the key inspirations and ultimately the driver behind the Post Office in Great Britain producing these tangy adhesives was that someone wanted to send a telegram costing £32. 2s. 0d., which in today’s money amounts to more than £6000.00.

That is a lot of dosh but as we are about to find out, it is even more in stamps. With 5s being the highest Telegraphs stamp at the time, it required six sheets of 5s – larger than the size of the telegram form!  So the genius of this often misunderstood citric fiver is that it is the size of two 5s telegraph stamps but equal in value to a block of twenty. So, with a £5 stamp, the same telegram form would accommodate £32.2s.0d easily.  By anyone’s standards that’s much better value for space.

And this is all artfully and succinctly illustrated in the exhibit “The £5 Orange 1876 to 1902” which is part of a dedicated collection on this value, and is without doubt the finest and most comprehensive study on this legendary and iconic Great Britain high-value, listed in the SG Specialised Volume One as SG133, 137, spec J128. This unique display, which is being presented under the name ‘The Nimrod Collection’, tells the story behind this issue from inspiration, to Die Proofs, Colour Trials, Specimens, issued stamp’s, Officials, the stamp’s interaction with Unification, and also the varieties which appeared as the plate became worn and damaged. Of course this presentation covers the telegraphic use and the transition from a ‘Telegraph’ to becoming a ‘Postage’ stamp. It also includes a stunning usage on a docket accounting for monies received in payment for unstamped bulk mail. This docket bearing £24.10s.0d, is the most important £5 piece known, and extraordinarily eye catching on account of it including four of the £5 on blued paper plus 4 of the £1 postage values and a 10s, all difficult stamps to locate used in combination with any of these valuable rarities.  The collection even includes forgeries both postally used – those put through the postal system in order to rob the authorities of  revenue – and those produced to deceive collectors, of which there is a gorgeous 1928 Paris Forgery which is so called because it was discovered by Robson Lowe in that city in that year. But it is worth pointing out that had it not been for the impossible lettering (AQ), which appears in the corners of this proof, it would by many dealers and collectors have been taken as genuine. 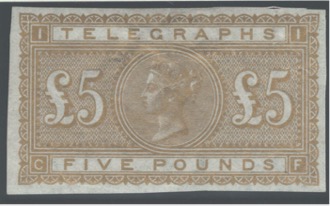 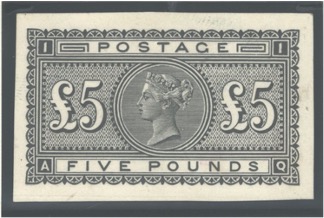 Now what a lot of people don’t tend to realise is that the original intention back in 1876 was to print this prestigious high-value in gold and not orange, and indeed there is a page dedicated to the original Colour Trials in gold with examples overprinted ‘Specimen’ and those with no overprint, and these trials come from one sheet of 56 stamps, making these very rare indeed, especially in private hands. In the end the costs of printing in this precious hue were too costly, and ironically the gold took on the carrot colour, so to speak, after trialling various other inks such as green, claret, brown and Mauve – all of which are illustrated in this wonderful collection.  At the end of this exhibit are the die proofs produced in 1901 when King Edward VII came to the throne and these are the only £5 examples which no longer have the corner check-letters, the Inland Revenue apparently no longer feeling there was a justifiable purpose for them, and this was also the start of the demise of this stamp because the need for them had dropped from a juicy 22,000 in 1896, down to a rather bitter 2,000 in 1900, eventually resulting in the Post Office abandoning the King Edward VII version of this previously fruitful orange adhesive. So what started out as a sweetly genius stamp, ended in a bit of a bitter end.